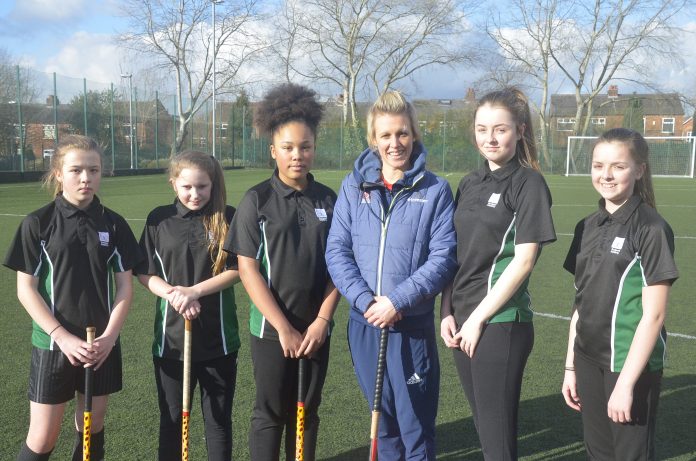 Stockport Academy students had the opportunity to brush up on their hockey skills with Olympic gold medal-winner Alex Danson.

After working on their stick skills, the group spent some time practicing their shots, before finishing off the morning with a game. Alex then led an assembly with the academy’s Year 7 cohort, inspiring students with tales of her experiences and what it takes to achieve your goals.

It was Alex’s second visit to the academy in two years, having previously spent time with students alongside fellow Olympian Chemmy Alcott as part of the school’s ‘X-Elle’ day in 2015, which was organised to raise levels of female participation in sport.

Stockport Academy’s Executive Principal Frank McCarron said: “We can’t thank Alex enough for visiting the academy to deliver this once in a lifetime opportunity to our students, who I know have been really inspired to get more involved in the sport as a result. Perhaps in years to come they could be coming back to the academy themselves as Olympic medal winners!”

Alex Danson said: “We had an excellent session and the students have all had a go at absolutely everything. They are a wonderful group of people and have got fantastic personalities. Attributes such as resilience and an eagerness to work hard are so important in any walk of life and were certainly on display on the hockey field here at Stockport Academy.”