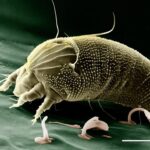 Thousands of people in South Manchester say they’re suffering with night-time allergies – but many don’t know the cause.

More than half believe hayfever is the reason why we’re suffering with sniffles, blocked noses and coughing.

Others say it’s down to dust in the bedroom.

Amena Warner from Allergy UK explains some of the biggest causes of night-time flare-ups: “Cats and dogs sleep on the bed sometimes, so animals can cause them.

“Mould is another thing that can cause night-time allergies.

“But the biggest [cause] is really house dust mites.

“Spiders naturally eat the house dust mite, but nowadays we don’t like a lot of spiders in our bedrooms so we’ve got nothing that will actually reduce the amount of house dust mites.”