At ten o’clock on the morning of Sunday June 4th 1967, a British Midland Airways airliner made its approach to Manchester’s Ringway Airport.

“For the 79 passengers on board this marked the end of their package holiday in Palma Majorca. Nine minutes later, the aircraft lay destroyed in the town centre at Stockport in Cheshire.”

This documentary examines the events of that day from a human perspective and recounts the actions of a handful of otherwise ordinary people.

On that Sunday morning these individuals found themselves in an extraordinary situation as they attempted to rescue passengers who were trapped in the wreckage. The 79 passengers had enjoyed a package holiday in Palma Majorca.

In 1967 the first of the modern jet airliners were in service with the major airlines, however this technology was not immediately affordable to the charter airlines whose profit margins were small. In an effort to keep costs to a minimum, they made use of the high number of increasingly obsolete aircraft which had been designed in the 1940’s. 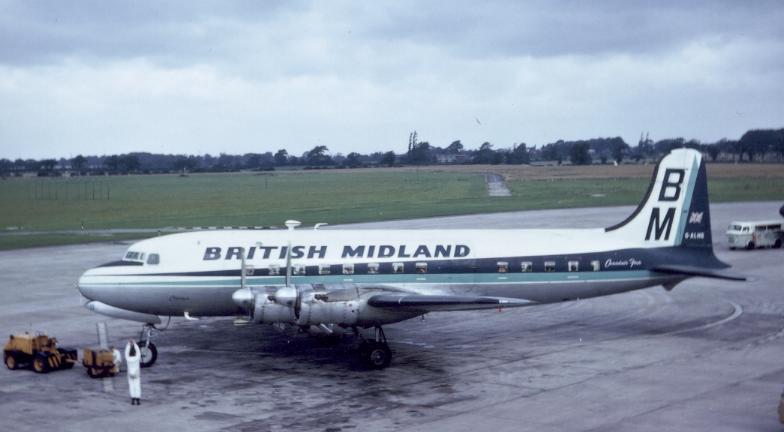 The aircraft involved in this accident was a four engine Canadair Argonaut, built in 1949. The aircraft suffered from a design flaw within the fuel system to which the previous owner (BOAC) had been alerted. Back in 1967, the lack of a structured formal reporting process meant that British Midland Airways (Who had acquired the aircraft in 1964) was unaware of the condition.

The flaw in the system remained dormant until that overcast, drizzly morning in 1967 when, just six miles before touchdown, engine number four stopped due to fuel starvation. The pilots elected to discontinue the approach in order to troubleshoot.

“THE AIRCRAFT WAS ONLY TWO HUNDRED FEET ABOVE THE TOWN OF STOCKPORT AND TOO LOW TO CONTINUE PAST THE HIGH RISE BUILDINGS THAT NOW FILLED THE PILOT’S WINDSCREEN.”

During a right turn towards the city of Manchester and for reasons never fully determined, they also shut down engine number three, leaving the aircraft struggling to fly on the two remaining engines.

The original Air Traffic Control recordings have been recovered from the Air Accident Investigation Branch and are used throughout.

The R/T exchanges make tense listening and the pilots can be heard battling to maintain speed and altitude. The Controller, recognising the impending danger, instructed the pilots to turn back towards the runway but to no avail. The aircraft was only two hundred feet above the town of Stockport and too low to continue past the high rise buildings that now filled the pilot’s windscreen.

In desperation, Captain Harry Marlow cut the power to the two remaining engines and dropped the aircraft on to a tiny patch of open ground at Hopes Carr in the town centre. After the crash, there was no fire and rescue attempts began.

Police Officer John Heath who arrived at the crash within two minutes and civilians Ernie Taylor and Brian Taylor (unrelated) were also immediate attendees on the scene and give compelling interviews, as do three surviving passengers (Vivienne Werrett, Harold Wood and the last person to be rescued, David Ralphs).

One of the first firefighters to arrive (Mike Philips) also gives an emotional description of what he saw. Some of the passengers were killed on impact but many others were trapped by their legs where the cabin floor and seats had crumpled and failed. Within four minutes of the crash, a serious fire broke out and the rescuers were forced to retreat from the flames, leaving those trapped on board to perish in the flames.

The cockpit had broken away on impact and PC John Heath began a rescue of the two pilots. His dramatic account and photographs taken at the time paint a compelling picture.

In total, only eight passengers and two crew (The captain and chief stewardess), survived. Many of those involved on the day are now deceased, including all of the four crew members.

However, we have interviewed the brother of the co-pilot and the former partner of the senior stewardess who gave very interesting accounts. We also examine the effect that the crash had on the town. We have interviews with the nursing sister in charge at the hospital where the survivors were taken, police officers who attended the scene, the coroner’s officer and even a lady from the Salvation Army who at age 23 found herself dealing with horribly burned bodies in a makeshift mortuary near the crash site.

This is above all a human story aimed at a broad audience. There is no ‘Air Crash Investigation’ type drama. The aircraft itself, call-sign ‘Hotel Golf’ is key to the story but apart from a brief explanation of the fuel system issue, the fascinating story remains focused on the people involved.